4 Reasons Why You Should Get a Second Phone Number

Phones are a necessity today. You can use it for practically everything – you can sit at home and order groceries, buy clothes, and go out and use it for contactless phone payments. Increasingly, companies are also implementing a 'bring your own device' policy, which means you can use your phone for work too.

A second phone number usually comes with unlimited calls and texts, which is always a plus given the low prices, but there are a few more advantages that we’ll look at today. Besides being a hassle-free solution that saves you time, it can help you as a business owner, in keeping your data safe and letting you call internationally.

The lockdowns meant a lot of us were spending a little too much time on social media. While you were there, you might've seen a few posts about why it's essential to support small businesses (SMBs). You aren't the only one. Last year, there was a surge in people wanting to help small businesses. And no doubt, you might've seen more posts about people starting their businesses from home during the pandemic too.

Whether you're looking to start something yourself or already have something going, you should consider a second phone number. People wanting to support small businesses means increased attention, which means more people would like to reach out to contact you. You probably don't want to post your personal phone number all over the internet, which is why a second line will come in handy.

If you are using your personal phone number, consider if it's the best image to give to your customers. A second line with a provider, like eFone, means you can choose a toll-free or local phone number with your selected area code, which seems much more professional. And as a bonus, you can get other professional features, like voicemail-to-email, call forwarding, and call waiting.

While social media might have you thinking, 'I don't need a phone number, they can DM me,' we're here to tell you that a business with a working phone number is much more likely to grow and retain loyal customers. Think about when you're doing a Google search for 'XX near me.' We don't know about you, but we usually go for a business with a phone number and website displayed. Emails and social media are great, but if you want to grow, you want to show your customers that you are easily reachable via several points of contact.

Online dating is a hit or miss. But we are now more aware of the dangers that lurk behind chatting with strangers on the internet. Things have changed over ten years – we started with 'never talk to a stranger on the internet'’ to people comfortably sharing everything about their life on social media.

While you might think this means that 'stranger danger' doesn't really exist to the same degree, a lot of us would still agree that it's better to be safe than sorry. You don't know who is on the other end, and a second number will protect you just in case it does turn out to be someone you aren't interested in and possibly even a little scared of.

More than 50% of people lie on their dating profiles, and so it's safe to say that you should proceed with caution. Online dating has often been associated with scams, stalking, and other violent crimes. In the UK, between 2011 and 2016, there was a 382% increase in crimes related to online dating. In 2019, Canadians lost more than $20 million in online dating scams. You can see where this is going.

Hiding your personal information, such as where you live, would be a good start. And you can give your second phone number until you're comfortable giving out your real one. This is especially helpful if you're already a private person – besides your name, no one has anything else to go off.

As a bonus, you can usually change the second number whenever you want and for free, which means you can start with a clean slate if things get bad.

If you have family or friends in another country, then getting a second number is a great decision financially. You can make unlimited calls and texts to other countries for a fixed, low price. For example, eFone offers unlimited texts and calls to Canada and the USA for $10 (CAD). Compared to the landline or carrier fees you'd pay, this is much, much lower.

Data leaks are becoming common nowadays. Just two months ago, over 500 million Facebook users had their data (including their phone numbers) leaked. Worse, Facebook announced that it didn't plan on telling the affected users what had happened. Luckily, haveibeenpwned, which shows all the times your data has been leaked in the past, came to the rescue.

Data hacks are annoying, and they're dangerous. A lot of people tend not to change their password after a breach, which means it’s just the matter of the wrong person going through a random list and finding your name and number.

A second number is useful for this. You’ll know that sometimes when you’re signing up for various websites, they ask you for a phone number. Well, they force you to give up your number for ‘verification,’ and you do it because you need to sign up.

Of course, we aren’t recommending a second number for the sole purpose of signing up to websites, but it’s certainly a bonus with the other advantages. At least the next time you get caught up in a data leak, your number is safe – you can change your password in seconds, but your number is another story.

Get your second number with eFone

If you're convinced, we can set you up with a second number in seconds. If you aren’t convinced, you can still give it a go with a free trial!

We offer several features with our $10 plan, including voicemail-to-email, unlimited calling, and a dedicated iOS and Android app. You can also purchase add-ons or call us to customize your plan and add countries of your own choice. 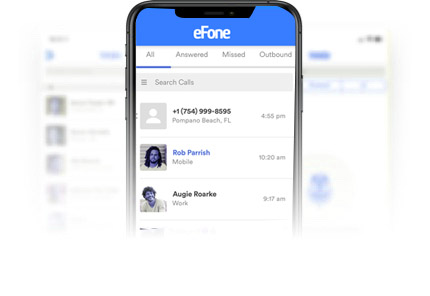